September in Michigan can be the start of cooler weather for the upcoming fall and it's also a perfect time to go to Mackinac Island! Kids are back in school and you don't have the crowds of summer tourists. What you do have as we experienced on our trip was busloads of senior tourists and large group business conferences. Even so, we had a pleasant trip with fairly low crowds, especially on our first day which was overcast and drizzly.

As always, I had my wonderful 35mm film camera ready to document whatever stood out to me.

In addition to spending time on the island we also checked out the Old Mackinac Point Lighthouse in Mackinaw City. Side note, yes, I spelled Mackinaw City different than Mackinac Island and that can be confusing! Mackinac is pronounced just like Mackinaw is spelled. Mackinac Island was named Michilimackinac by the French who first came to that area to establish a mission for the Huron Indians. It was later shortened and Mackinaw City just chose to use the phonetic spelling. You can read more about Mackinaw City here.

We chose to stay at a hotel on Lake Huron in Mackinaw City and just take the ferry in on both days we spent on Mackinac Island. I really wanted to stay on the island but there were only two rooms available on the whole island at the time I booked and neither worked well for us. For both of our ferry rides over we chose the time where we would take a tiny detour and go under the Mackinac Bridge, one of the longest suspension bridges in the world. On the ferry you have the choice to sit inside or to sit on top with a great view of everything. 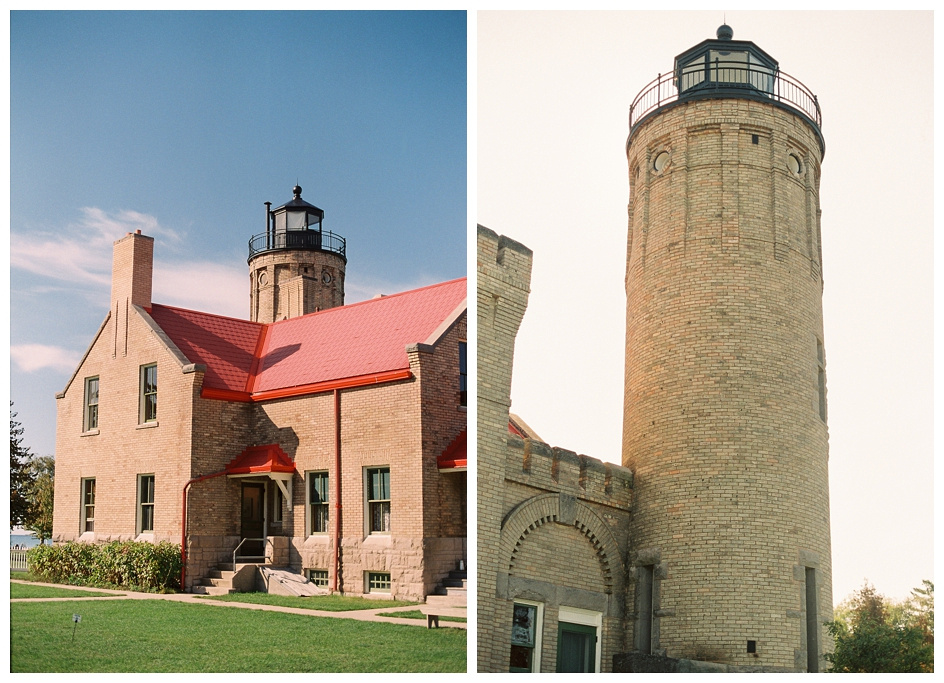 Once arriving at the ferry docks there is a bustle of visitors exiting the boat, some gathering bikes they brought over, others are islanders bringing groceries back from the mainland. Ferry workers are unloading luggage headed to hotels or other small freight items that were brought aboard. The people spill out onto the main street, newcomers trying to find their bearings on where to go and what to do next. Our first morning we came over on the first ferry so just enjoyed the empty streets reminiscent of early morning Magic Hours at Disney World. We found a cute cafe that was open and had a delicious small breakfast. 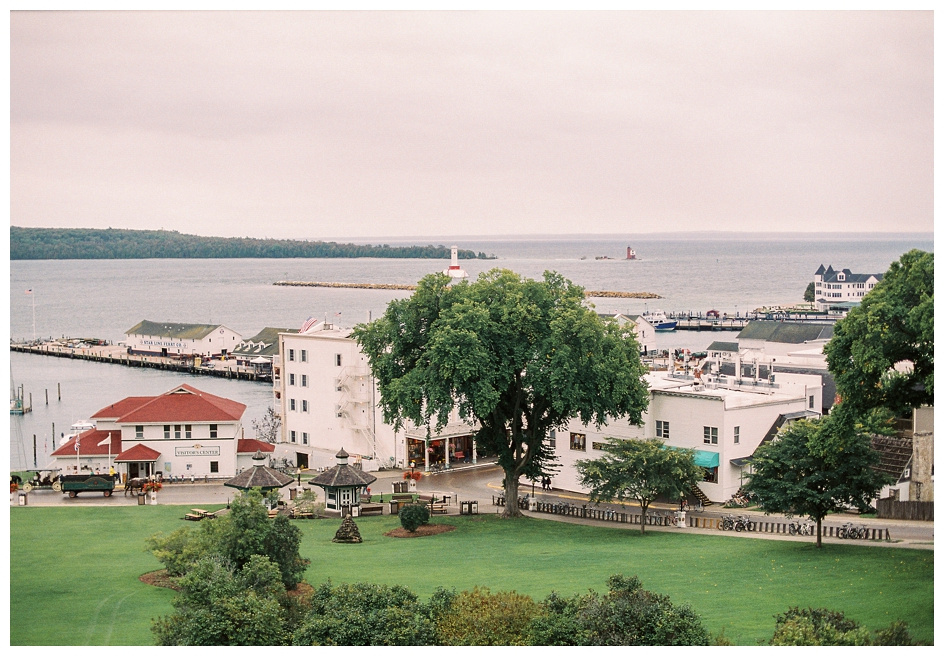 Mackinac Island's downtown area is all on the main street with residential areas flowing from there. The stores are mostly quaint tourist shops, some with unique items and some with more traditional kitschy tourist items. My favorite store was the adorable Poppins and they also had the friendliest staff! 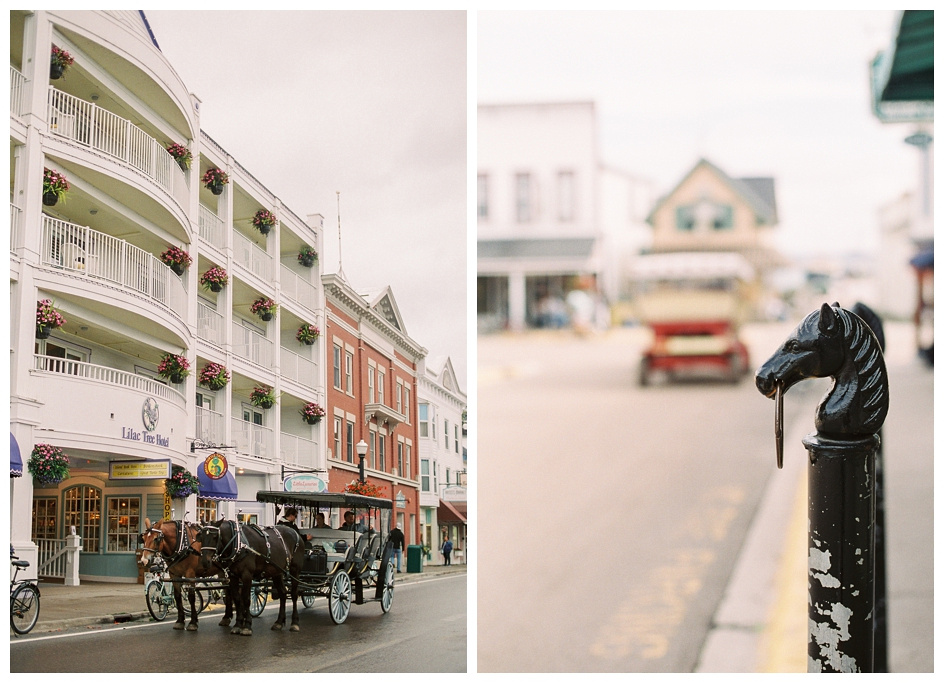 Since no cars are allowed on the island you will see a lot of bikes and horse drawn carriages. Bikes are the main mode of transportation for most people and tourists on the island. You can take a carriage ride and there are of course horse drawn tours offered. You can bring your own bike on the ferry but it does cost extra so it may be convenient to rent a bike at one of the many bike rental shops. They have different offerings including tandem bikes which can be fun. 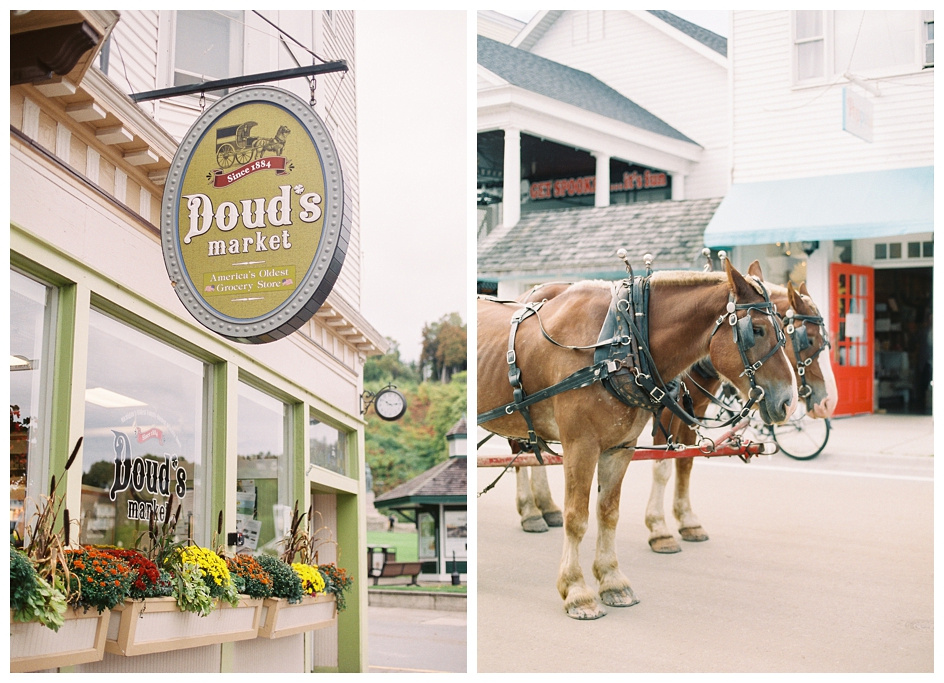 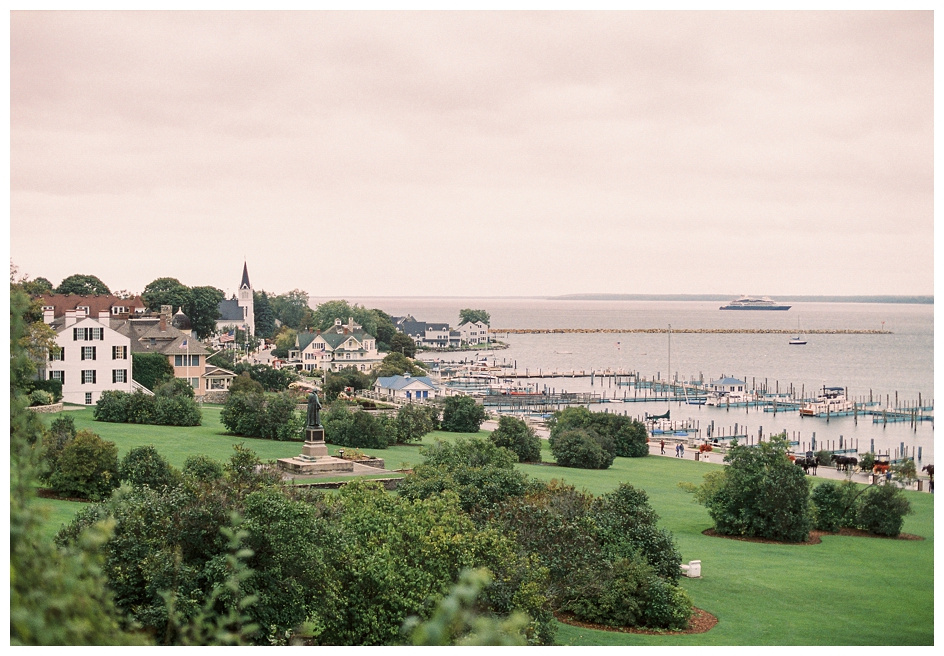 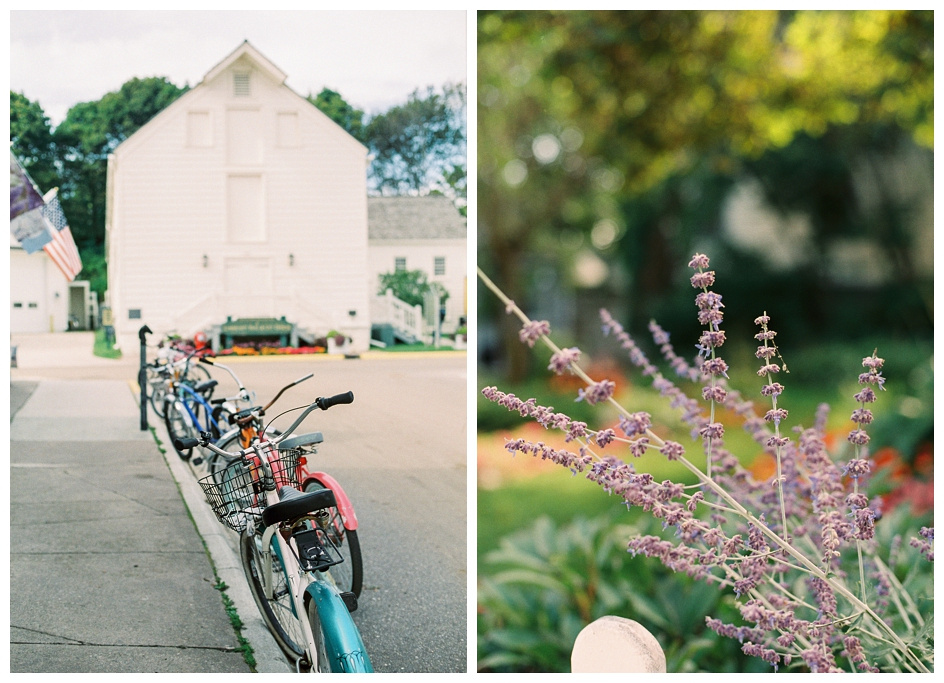 There is an abundance of delicious restaurants and cafes and of course fudge! The best fudge is on Mackinac Island and the smells entice you into the shops to watch them make it and taste test different flavors. 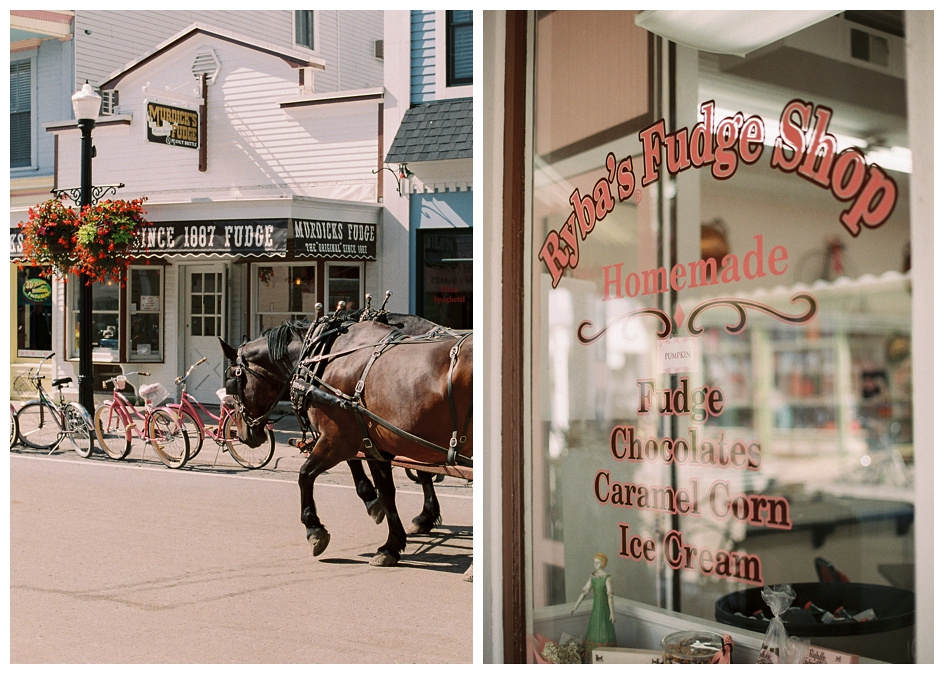 In addition to a few small hotels much of the lodging on the island is in the form of bed and breakfasts in some of the island's historic homes. Tourists started coming to the island in the late 1800s and the wealthy built cottages and large summer homes. 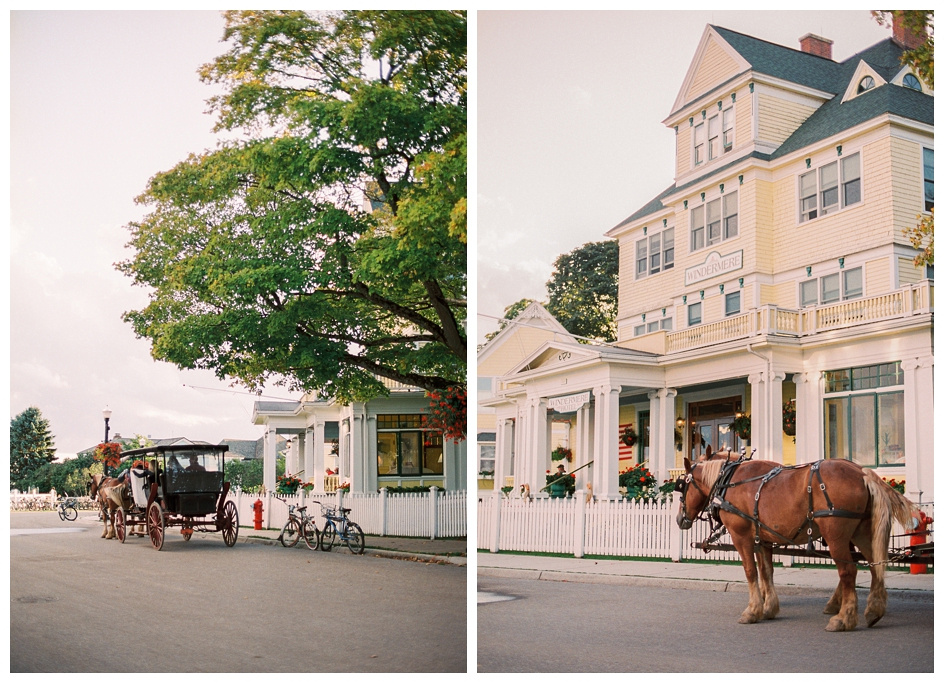 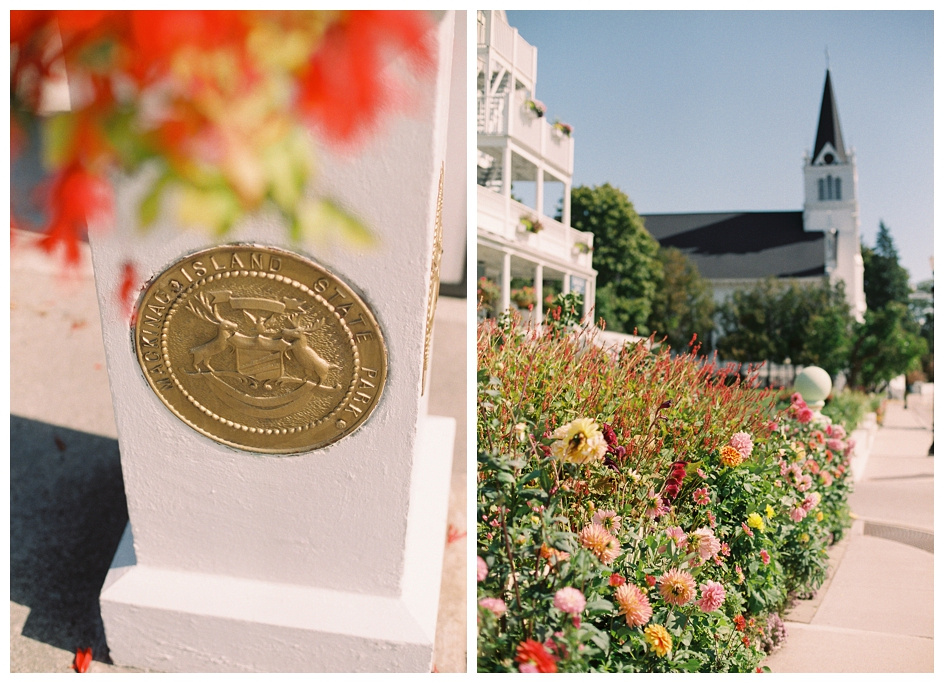 There are a few historic churches on Mackinac Island including Sainte Anne Church pictured below. The parish dates back to the 1600s but the current structure was completed about 1880.

The McGulpin House (pictured below) which according to the Mackinac State Parks website may be one of the oldest private residences in Michigan, dating back to the late 1700s and possibly was moved from the mainland to the island in the early 1800s. 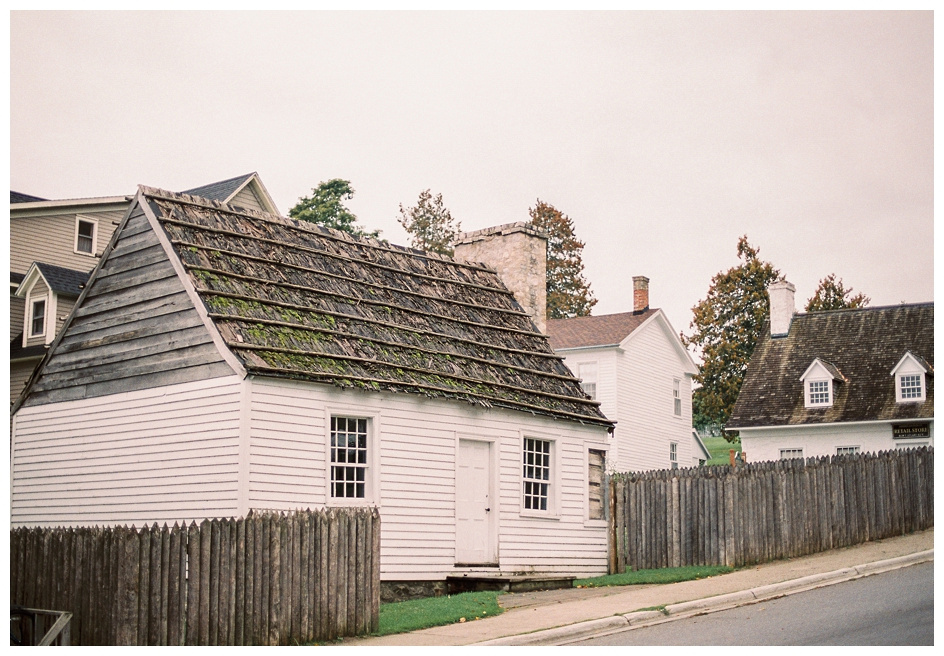 The view from the entrance of Fort Mackinac overlooking a southwest portion of the island with a faint Mackinac Bridge in the background and Mackinaw City on the mainland. 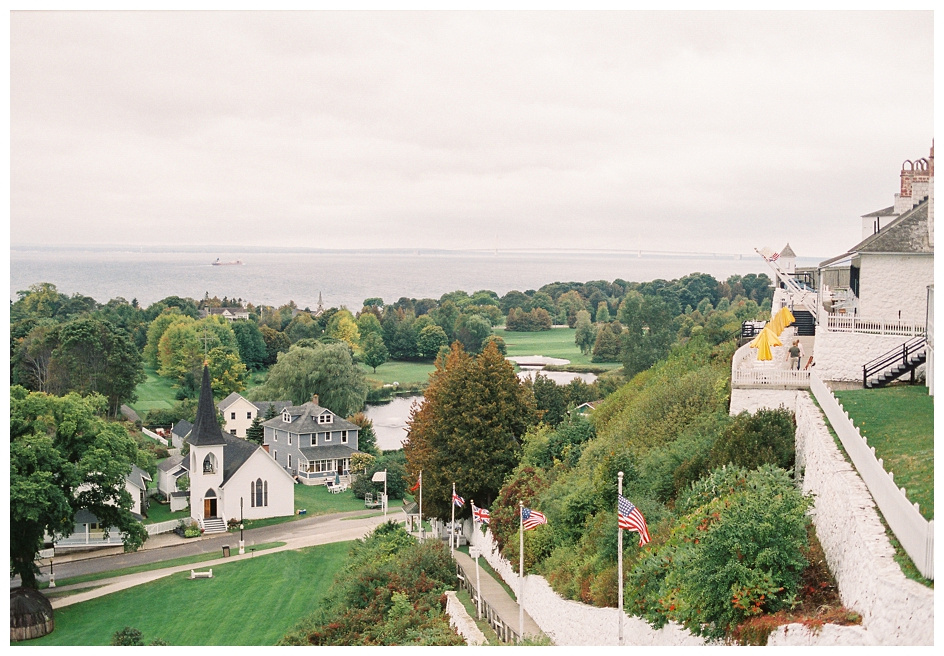 Fort Mackinac dates back to the American Revolution when it started as a British Fort. The Fort now acts like a museum telling history of the fort and also Mackinac Island in general. Multiple live shows with historical reenactors are featured daily. I highly recommend purchasing tickets to enter the fort when visiting the island. 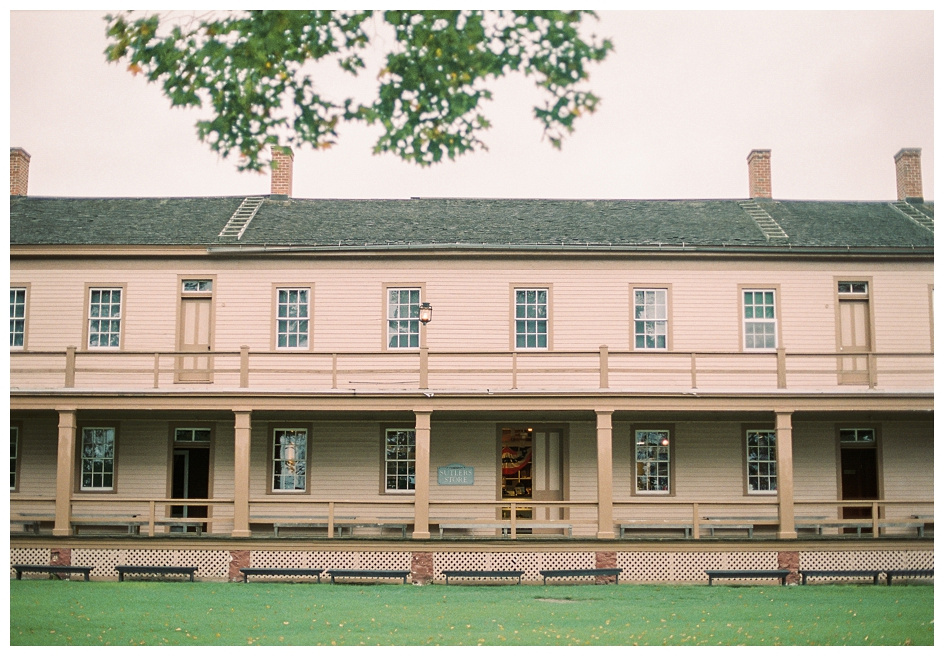 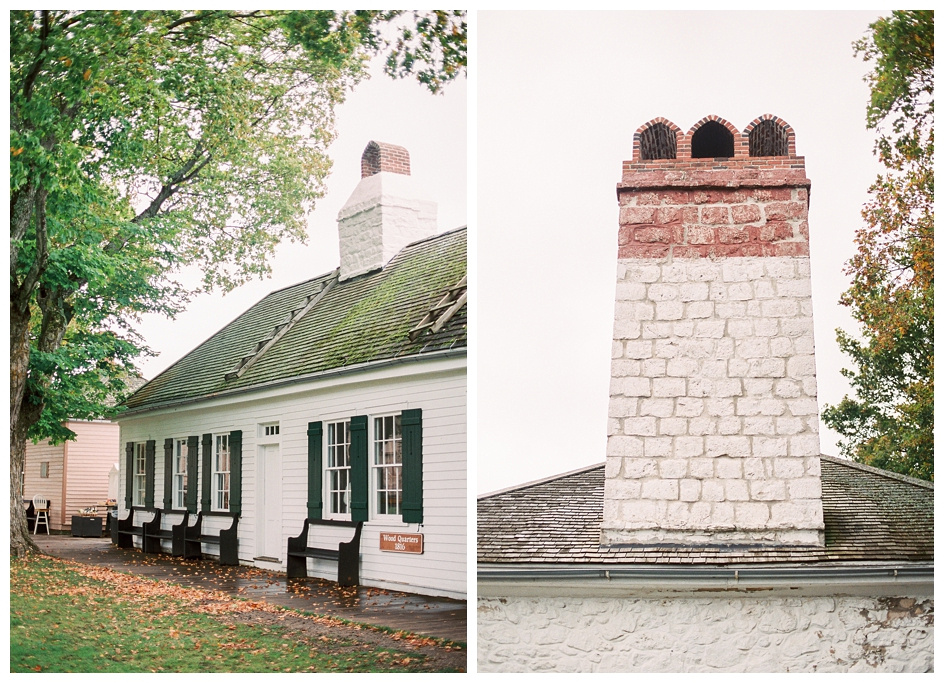 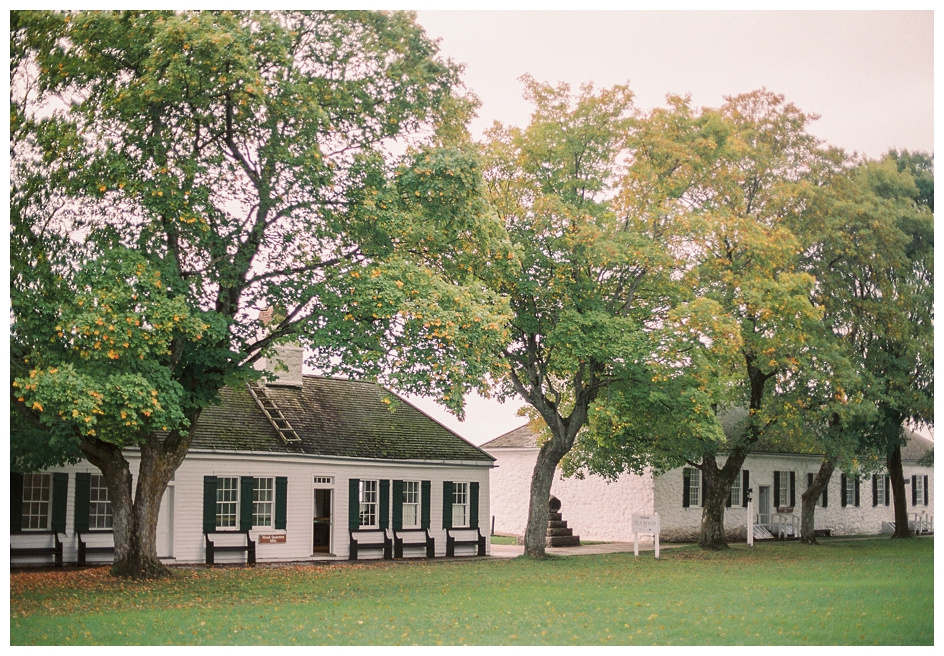 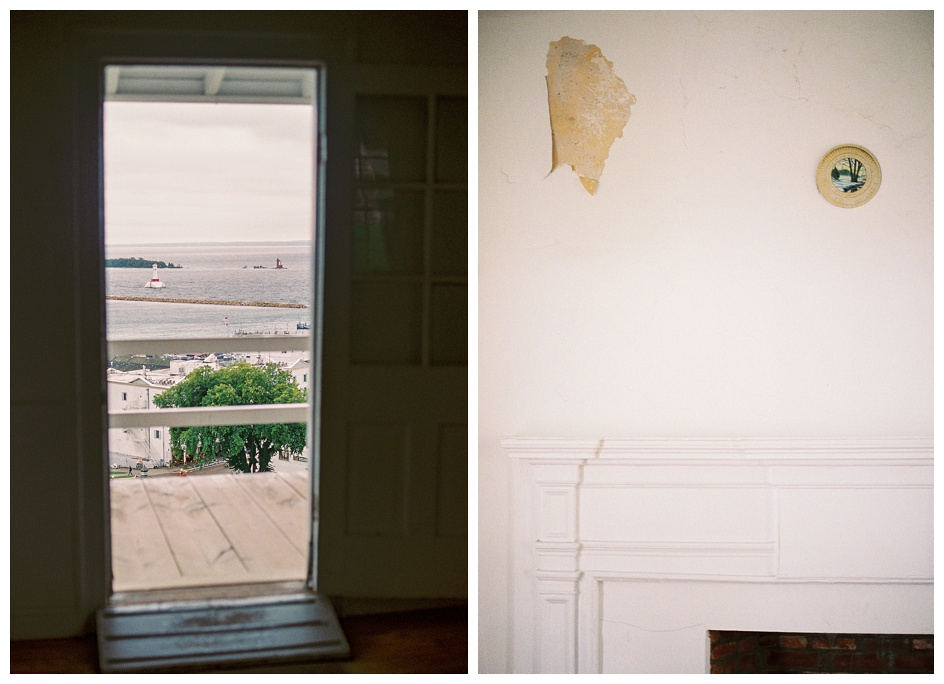 Opened in 1887, the crown jewel of Mackinac Island is the Grand Hotel sitting on a hilltop facing Mackinaw City and overlooking the downtown area. As a luxury resort there is a dress code for adults and children and there is a $10 charge for non-guests to enter the hotel and explore the grounds.

Many tourists take advantage of the 8 mile road around the perimeter of the island and take a couple of hours to bike around. When we were there the shoreline had encroached on the road and some places had damage. Since that time further damage has been done and parts of the road are currently being worked on and bikers are re-routed inland.

I highly recommend anyone visiting the island that can to take this bike trip around. The views are amazing and the peaceful serenity of the blue clear Lake Huron water and the gentle waves and breeze are something magical and not to be forgotten.

As you bike around there are a few places to stop and read the history or sightsee. Once of these places is Arch Rock pictured below. Another must stop on the bike ride around the island is the Cannonball for a quick bite. 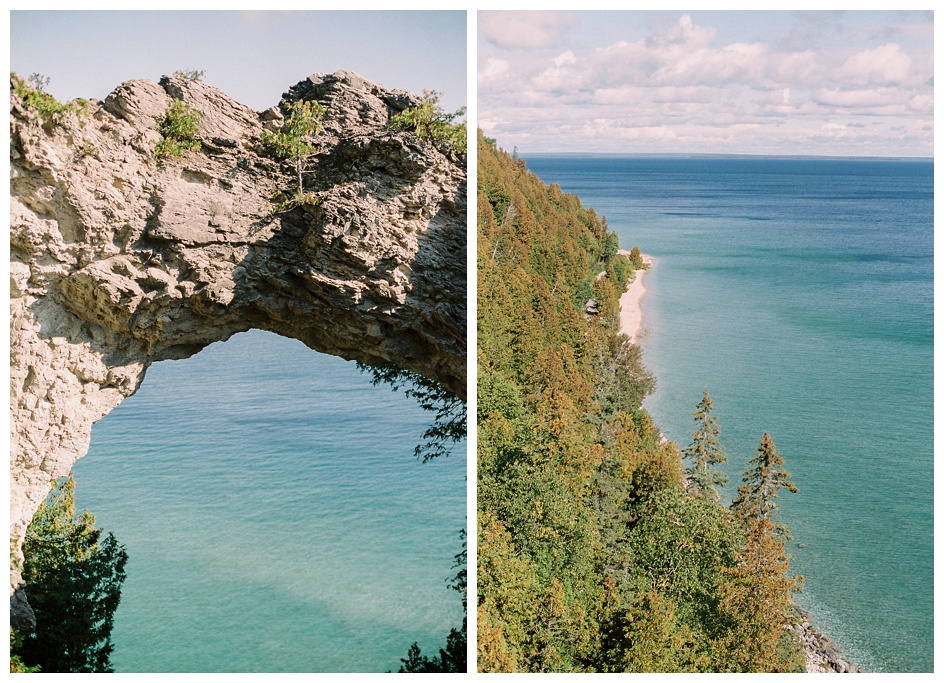 Since the island is surrounded by Lake Huron, beautiful water views are available from many places on the island.

Round Island Light and the Mackinac bridge in the Straits of Mackinac as seen from the ferry headed back at sunset to the mainland. 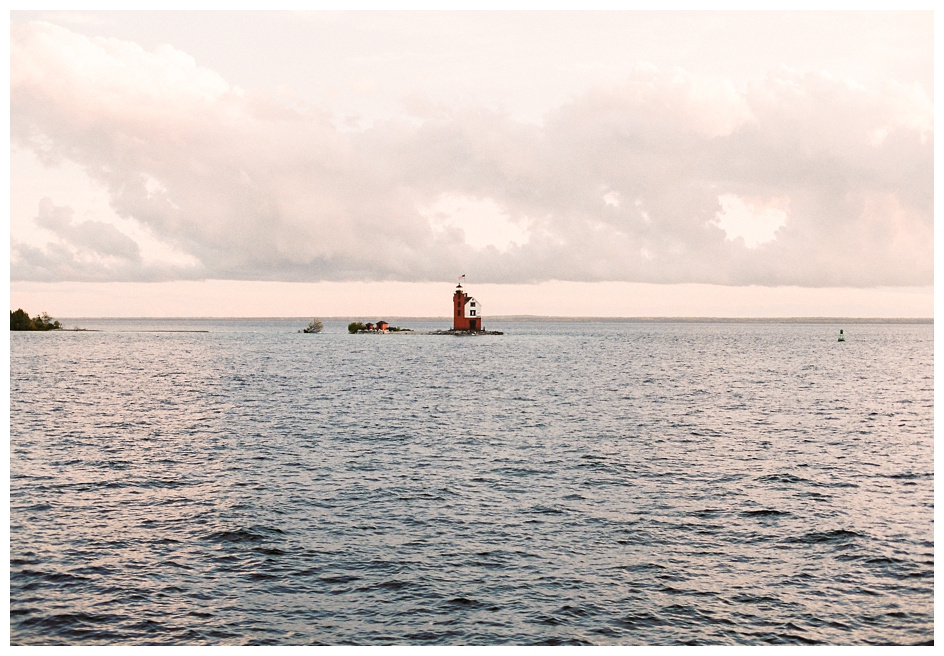 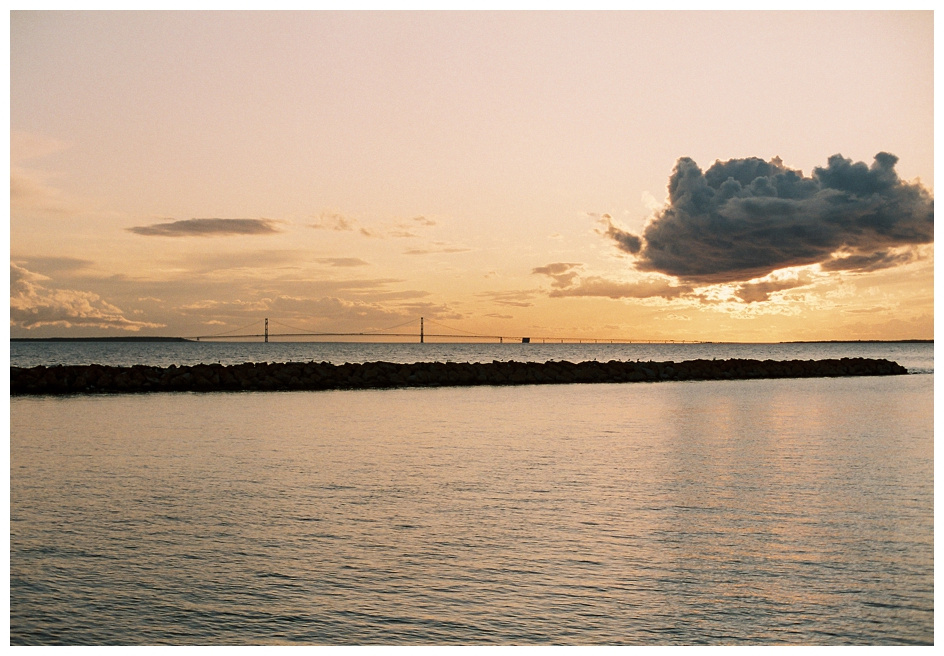 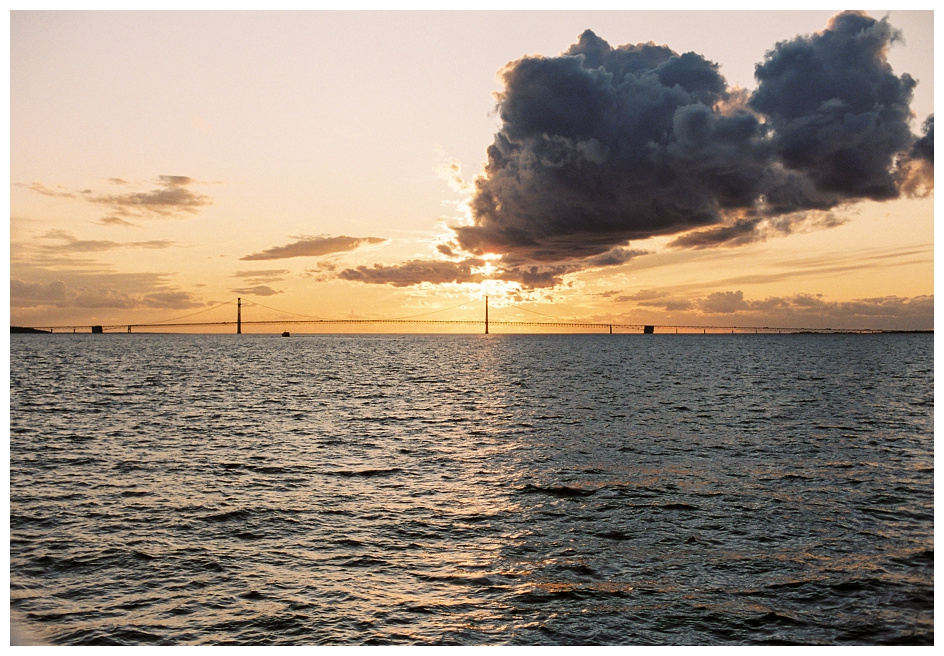 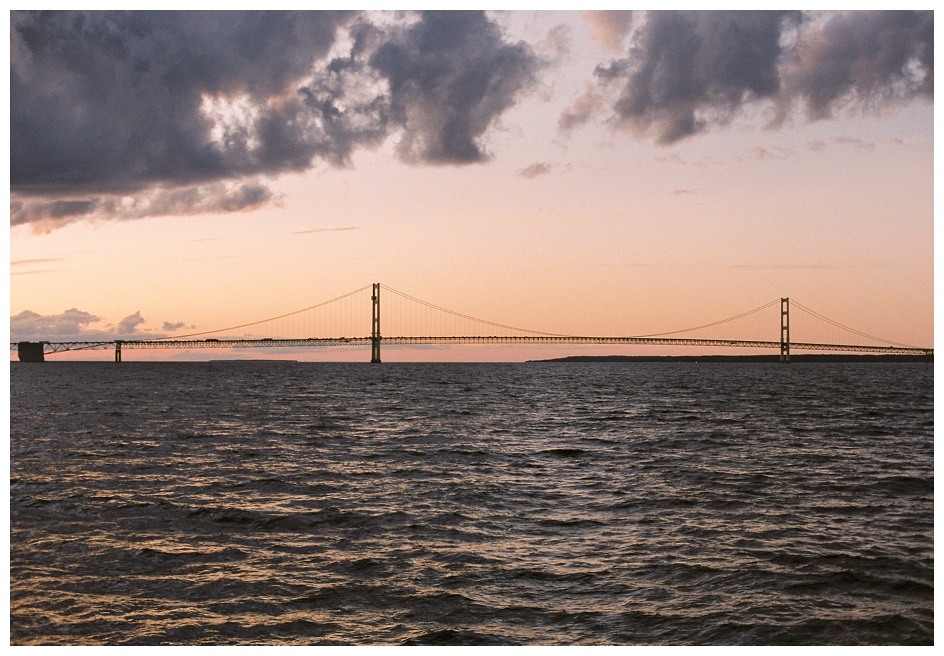 For more information about visiting Mackinac Island you can check out their website and for more in depth history of the island you can view that here. I hope you enjoyed my pictorial representation of my visit and the little bits of history and info. Michigan is such a great place to visit, be sure to not leave it out of your future travel plans!